4 Notable Startups That Failed in 2016

Most of the time, the only startups we hear about are the ones that succeed. Meanwhile, the countless startups that ultimately fail get lost in the shuffle and forgotten about. If this happened to you, rest assured that you’re not alone. Just check out some of the startups that failed in 2016.

I walked four blocks to where my car was parked, holding a box that was filled to the brim with my personal belongings.

To be honest, I don’t think I ever looked up to check if the light was green or if there were cars coming any of the times I crossed the street on my way back to the parking garage.

I couldn’t think straight; my head was a mess of thoughts and emotions. The company I had poured my blood, sweat, and tears into turned into one of the countless startups that failed in 2016.

When I made it back to my car, which was somewhat miraculous considering I wasn’t watching where I was going the whole way there, I placed the box on the passenger seat and proceeded to just sit there.

I couldn’t tell you exactly how long I was just sitting there with my car keys still in my pocket.

My head literally hurt from all the anguish I felt trying to wrap my head around the reality of the situation and all I had lost.

It wasn’t until the owner of the car next to mine opened and closed his door that I snapped out of my daze and realized where I was.

At that point, I realized I had better put the key in the ignition and get out of there, for fear of looking like a lunatic.

My friends had implored me to meet them for drinks that night to drown my sorrows.

I didn’t want to go; it just reminded me of the time my investors and I made a toast to our future, and how excited I was at that time, and how all that excitement had been completely drained out of me now that the company was no more.

Instead of going out, I just went home, plopped myself on the couch and sulked. I sulked for weeks on end.

When I first started my business, I read that 90% of startups fail, which is true. I just didn’t think I would be one of them.

The failure rate of startups utterly astounds me, but I suppose it does give me some solace knowing I wasn’t the only one.

People who had startups that failed in 2016

Here is a look at some of the people just like me; people who had startups that failed in 2016. 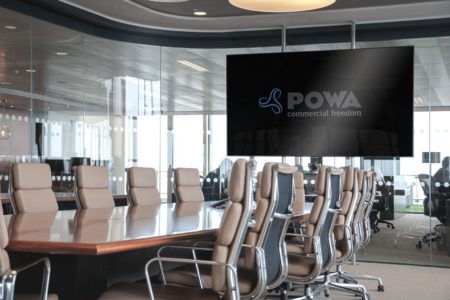 This company’s demise is downright crazy to think about.

Powa Technologies was no SME. It was an e-commerce operation whose flagship product, PowaTag, was a mobile payment app that allowed users to make purchases directly from their smartphone.

After being found in 2007 by Dan Wagner, it was valued at $2.6 billion in 2014 after it acquired MPayMe, a Hong Kong technology firm.

Even former U.K. Prime Minister David Cameron had interest in the company as an investor, and that’s on top of $76 million in Series A funding, the largest Series A funding ever for a technology startup.

But the downfall of Powa Technologies was swift and almost frightening to watch, even from afar.

As it turns out, that $2.6 billion evaluation wasn’t quite so accurate, as the company may have only been worth $106 million.

It was also found that Wagner and the company made false claims about its relationship with the Chinese company that was driving up its value.

Also, many of the investors who made Powa Technologies look like such a valuable and promising company had not actually invested.

Instead, they had merely expressed an interest, which is a big difference in case you didn’t know.

$2.6 billion evaluation wasn’t quite so accurate

Currently, more than 100 former employees are claiming that the company owes them unpaid wages of roughly $200,000.

Tax creditors are also claiming that Powa Technologies owes roughly $20 million. However, neither party is likely to end up receiving what they are rightfully owed.

Instead, Powa has been sold, with Wagner likely preparing for his next project.

So, be sure to mark that down: lying is a big reason why startups fail. Hopefully, none of you made that same mistake.

Lying is a big reason why startups fail 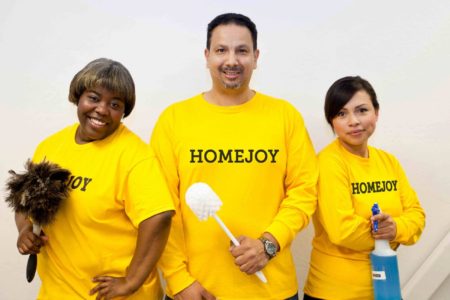 Homejoy is the kind of startup you root for, at least I was.

Founded by siblings Aaron and Adora Cheung in 2010, it was a nice SME that helped connect people who wanted clean homes with house cleaners who could get the job done.

Adora actually did many of the cleaning jobs herself in the beginning, which I personally salute.

How can you not love it when the founder of the company is willing to get her hands dirty and get the job done? I really respect that and honor the effort she put into her company.

Things actually looked promising for Homejoy for a while.

A few months after being founded, the company received an investment from Y Combinator, allowing them to get operations underway in 2012.

A year later, the likes of Resolute VC, First Round Capital, and Andreessen Horowitz also invested seed money with Homejoy.

Google Ventures even came in during Series B investing, and when all was said and done, Homejoy had raised a total of $38 million.

Things were going so well that Homejoy was able to expand overseas and start serving the U.K. At its peak, the company was servicing 31 cities in the U.S., U.K., and Canada.

Homejoy even established a nonprofit organization called the Homejoy Foundation that helped provide support for veterans and their families. All things considered, it was a nice little operation with great potential

Homejoy had a poor customer retention rate, which made growth difficult to maintain

Alas, it was not meant to be. A slew of lawsuits regarding whether those who worked for the company were employees or independent contractors made it difficulty for Homejoy to remain profitable.

A number of former employees also mentioned that Homejoy had a poor customer retention rate, which made growth difficult to maintain.

It’s also been insinuated that its expansion to the U.K. put a strain on the company and may have contributed to its failure. 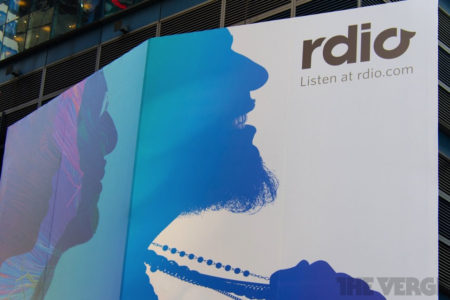 Rdio’s problems as a startup were not so much failed products, but rather an oversaturated market.

As a music streaming service, Rdio certainly had potential, but it also faced a great deal of competition, and so standing out in such a competitive arena was always going to be a difficult task.

Rdio was co-founded by Niklas Zennstrom and Janus Friis, the same duo that founded Skype.

Rdio launched in August 2010, and at the time was up against streaming services like Spotify, Rhapsody, and Napster (Remember them? If not, then you’re way too young).

In the years to come, Rdio would accumulate an impressive number of investors and partnerships, perhaps most notably with Cumulus Media, who acquired 15% of the company in exchange for $75 million in promotions.

Rdio would go on to have relationships with Jaguar Land Rover, Tesla Motors, and Google Chromecast, among others.

Ultimately, Rdio became available in over 60 countries worldwide, with several notable music publications calling it the best online streaming app, in large part because of its personalized stations and playlists, as well as the ability for users to share songs and albums across social media networks.

Sounds like a great service, doesn’t it? The company was even able to launch a music and television streaming service called Vdio.

However, a little more than five years after it was founded, Rdio declared bankruptcy and ultimately sold much of its intellectual property to Pandora.

Many blame the company’s demise on its failures when it came to marketing and distribution.

Sadly, record companies hold much of the power in the music streaming industry, making the margin for error quite small and leading to business failure, even for a company like Rdio that offered a great product.

In the end, Rdio simply couldn’t sustain growth while up against a slew of worthy adversaries like Spotify.

Finally, there’s the case of Zenefits, a company founded by Parker Conrad in 2013 that aimed to provide human resource services to small businesses, a most useful and noble idea, indeed.

Small businesses and startups rarely have proper knowledge of human resources, nor do they have the means to hire an H.R. department, creating a huge market for Zenefits.

Conrad’s startup was particularly useful with regard to health insurance, which is a complicated matter for big companies and can be virtually impossible to deal with for SME firms.

Fundraising was never an issue for Zenefits, it raised more than half a billion dollars from venture capitalists like Andreessen Horowitz, TPG, Fidelity, and Venrock.

At its peak, Zenefits was valued at $4.5 billion, an amazing accomplishment for a company that was pulling in $20 million in recurring revenue by 2014.

However, the company’s downfall came about due to a slew of mistakes from Conrad. He overlooked obvious positions within the company like an officer manager, IT workers, and even a receptionist.

Zenefits also used its own software to handle its own HR, with Conrad personally in charge of it.

Unfortunately, those issues were just the tip of the iceberg with regard to the internal problems at Zenefits.

Conrad could not fix the disorganization within the company, which led to both the illegal selling of insurance by the company and Zenefits falling short of its revenue goals in 2015.

In early 2016, Conrad resigned from the company amidst much outside pressure. Meanwhile, downsizing at the company began.

The future of the company remains very much in doubt, with new CEO David Sacks scrambling to clean up the mess that Conrad created.

Whether it’ll be enough, or if saving Zenefits is even possible, remains to be seen.

Conclusions from the Startups That Failed in 2016

So, what can we learn from the startups that failed in 2016? Well, for starters, don’t lie to investors or about investors. Actually, don’t lie at all, that should be rule no. 1.

Second, don’t overlook important positions and don’t try to do everything yourself. Hire people to do jobs and trust that they can do them well.

The devil is in the details. You can’t leave any stone unturned and you have to look at things from every possible angle to make sure you have all of your bases covered.

Of course, this still may not guarantee success. As I mentioned earlier, 90% of all startups fail. Even people who are smart and work as hard as they can end up failing.

If you fail, fail because something was out of your control. You don’t want to look back and wish you had done something differently.

Finally, always look both ways before you cross the street no matter how upset you are. I was lucky nothing happened to me when I did it, but other may not be as lucky.

You and your employees have better things to take care of than stressing about leave and time off requests. Take the first baby step to an organized and stress-free environment by exploring us at cake.hr

80% Percentage of businesses that fail within the first 18 months, and 1 in 2 Patent application approved.

Bryan is a freelance writer and editor with credentials all over the Internet, primarily at CakeHR, where he is a regular contributor. He has great interest in writing about the modern workplace and all of the ways that it continues to evolve.

With entrepreneurs spending 40% of their day on administrative HR tasks, on-premises software is coming to an end. Say hello to cloud-based HR software. 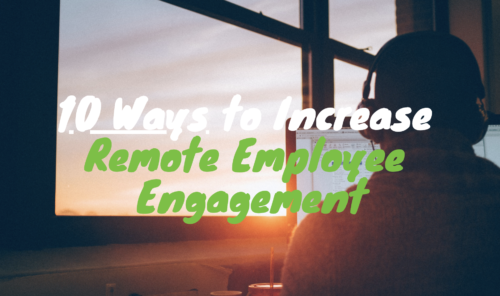 The Traditional Office is Dead: How Do I Keep Remote Employees Engaged?

We thought we had more time to adjust to the inevitable transition from traditional brick-and-mortar, nine-to-five work arrangements. 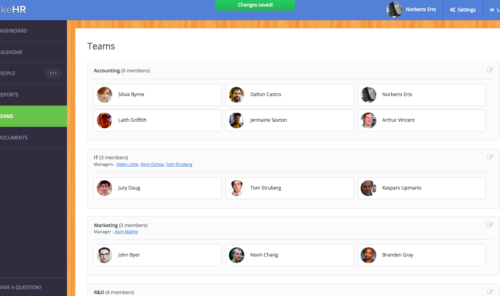 How to Split Employees in to Teams